This evening's practice was moved into the indoor practice facility due to heavy rains in and around Oxford throughout the afternoon. The practice was a bit different than the previous practices likely due to the fact that the players and coaches had only one field to work with as opposed to three. Despite this, it was still a productive practice. Here are some things we noticed:
1. Jevan had a decent practice today. He showed decent pocket presence and put great zip on his throws, especially in the 11-on-11 drills. During warmups he showed that he is truly the most athletically gifted quarterback on the team by really putting heat on his throws.
2. Nathan Stanley should be pushed into the second spot on the depth chart. We know a lot of us want to redshirt him but he would not disappoint as a backup.
3. In the halfback drills, Cordera Eason consistently showed the best footwork. Enrique Davis showed great speed, especially for his size but he wasn't really on top of things. We saw him running a lap around the inside of the IPF during rushing drills, likely because of poor performance.
4. Demareo Marr has a lot of work to do. He had difficulties in the tackling drills and did not show great coverage skills in the pass skeletons and 11-on-11 drills. At this rate, he could be stuck as a third-teamer for the rest of the fall.
5. Dustin Mouzon really had an excellent practice. He was on top of everything and even had an incredible pass deflection.
6. Patrick Trahan showed incredible defensive presence during this practice. He blitzed well during 11-on-11 drills and had a pass deflection in the pass skeletons. He worked out with the second team as the will linebacker and will add very significant depth to our linebacker corps. We know a lot of people saw linebacker as being a weak spot for our team for this upcoming season but we feel that the potential is there for a few of these kids to emerge as playmakers.
7. The wideouts did not perform as well as one would have hoped. There were some inexcusable dropped passes and a few just did not put forth an incredible effort. Mike Wallace had a few good grabs and Lionel Breaux pulled in a deep touchdown throw from Billy Tapp during the pass skeletons.
8. For a little guy, Marshay Green has some serious pop. He knocked H.R. Greer, a freshman fullback, clear onto his back during the pass skeletons. I'm sure we'd all love to see him to hit like that during an actual game situation.
9. Allen Walker had a sick, sick one-handed interception during the 11-on-11 drills. He was moving to his left and the ball was thrown to his right. He more-or-less flung his right arm at the ball and came down with it. The kid's incredibly athletic and, thanks to Don Decker's strength and conditioning program, has really put on some solid weight. Hopefully he'll make similar plays this fall.
10. There were a few injured players. LaMark Armour is slated to have surgery so he did not dress out. Johnny Brown was nowhere to be seen. Our guess is that he was in some sort of therapy during the practice. Greg Hardy was not in cleats, but rather basketball shoes and had a bit of a limp. Reid Neely was not wearing pads and had a boot on his right foot. Kendrick Lewis was taken out of practice with a rolled ankle but came back shortly thereafter. He's likely okay.
Let us know what you think and enjoy your evenings.
EDIT: We were recently contacted by the remote controlled spy plane pilot and it turns out the fella's a Rebel through and through. He runs a small aerial photography business and was simply testing out his equipment and enjoying himself some Ole Miss football. Below is one of the photographs he took. If you'd like to purchase a larger copy of this photograph or procure the services of a Rebel-owned-and-operated aerial photography business then visit his website here. 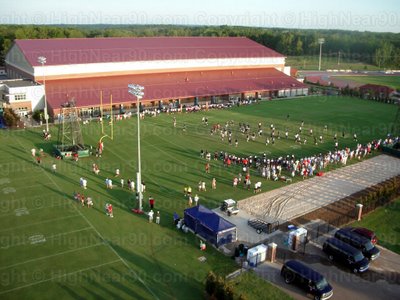 I mean, we accused the guy of Hobby-Lobby based clandestine espionage. The least we could do was plug his business.