Share All sharing options for: SEC Traditions: The Best and Worst - LSU

Oh LSU. You're such an enigma wrapped in a mystery wrapped in a deep fried shell of cornmeal. You're a school which I respect greatly for your BCS titles, traditions, and location (an hour away from NOLA, that's legit). You're also a school which I despise for your horrendous sidewalk fans, homage to filthy bayou lifestyles, and stench. To single out the absolute best and worst about you was pretty damned difficult but I gave it my best shot.

Best Tradition: "The Golden Band from Tigerland." I know that, as a Rebel, you hate these bastards deep down inside, but you cannot honestly tell me you have heard or seen a louder, prouder marching band. They're big, they're deafening, and they do an amazing job of firing up the fans in Death Valley. I know Ohio State would beg to differ (they try that whole "begging to differ" shit a lot, huh?) but the LSU marching band is absolutely peerless.
Honorable Mention: Mike the Tiger. LSU is the only school that does the whole "Tigers" thing right (you hear that, Memphis, Auburn, Mizzou, etc?) and Mike is definitely one of the best live mascots out there. He's in the same league as Uga, Ralphie, and Bevo.


Worst Tradition: Cajun last names. I was almost inclined to say "Cajun people," but who knows what kind of anti-defamatory lawsuit we'd get slapped with after that one. It's a good thing I took a couple of years of French in high school becuase if I were just to read names like "Perriloux," "Stefoin," "Doucet," or "Francois" out of the context of LSU, I'd be lost. 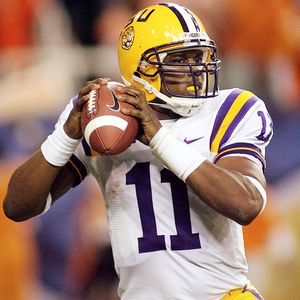 The Cajun names also serve greatly to remind everyone that LSU's fanbase is made up primarily of the most obnoxious people outside of the Jersey shore: Louisianans. Seriously, I'm certain that I've run into a few extras from The Waterboy a time or two down there. I honestly love New Orleans, but I wouldn't mind if it's surrounding counties parrishes drifted off into the Gulf of Mexico.