Share All sharing options for: SEC Traditions: The Best and Worst- Georgia

Georgia has been getting a lot of good press lately, oh wait, shit, they've suspended their ENTIRE first string for the season opener against Georgia Southern? Jeez, the Eagles might fly high that day. When it rains it pours Dawg fans, so let's get into your heralded history and tradition in our latest installment of SEC Traditions.


GEORGIA
Best Tradition: UGA I-VII. Although UGA VII has yet to be introduced to the rest of America, he is already slotted in for the throne. This could be one of the great traditions of college football. Pure bred English bulldogs that are white without any other blemish. They are the unadulterated purity of college athletics. I have seen these majestic beasts and even had my picture taken beside UGA V and VI. My face shone bright for the next week after the picture was taken from the glory of the dog. All silliness aside, Georgia has the greatest mascot tradition in the SEC and the country. 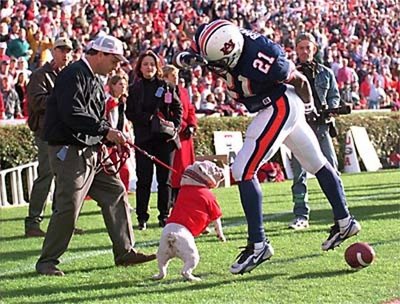 Pretty sure you can find this framed on every wall in Cobb County.
Worst Tradition: Infatuation with Herschel Walker. This is not to say Walker wasn't one of the greatest players in UGA history, but he sold out the team to go to the USFL, not the NFL, the USFL, after his junior season. Plus, he's nucking futs.
Great player, no doubt. He won a Heisman trophy and a National Championship, okay. Well, so did Frank Sinkwich, but you don't see Georgia fans walking around with old skool 42 jerseys in Athens. It's my opinion that every player deserves their due time so move on from Herschel, Dawg fans. Your obsessive love for this one player makes me unable to stand some of your fans.
Honorable mention: Just to spite Florida fans. Here's this jewel of football history. Watch #77.
Then watch one of the greatest plays in football history.