Share All sharing options for: SEC Traditions: The Best and Worst - Alabama

Alabama is rife with tradition. legacy, fanfare, and history. How on earth can one pick a single "best" and a single "worst?"

Actually, it's quite easy. They're one in the same.

Best Tradition: Paul W. "Bear" Bryant. He is the greatest coach in the history of college, nay, all of football. He won conference championships at three different schools and national championships at two. His successes are synonymous with the Alabama Crimson Tide and one cannot begin to mention the history and tradition of the SEC without mentioning Bryant. Honestly, is anyone surprised that The Bear's victories would be named as Alabama's best tradition?

Worst Tradition: Paul W. "Bear" Bryant and the worship thereof. Just look at this picture on the right. The sad thing is that this guy thinks his tattoo was the most badass couple grand he's ever spent. "Fuck groceries! I need the Bahr on mah back!" Sure, it's neat to pridefully wear Coach Bryant's signature houndstooth hat and he most certainly deserves to have a museum erected in his honor, but seriously, the guy is dead. Let him rest in peace. He undoubetdly has earned respect and reverence, but not a religiously fervent following.

Another problem I have with this obsession with Coach Bryant comes with the constant comparisons to The Bear every subsequent Bama coach has had to endure. Coach Bryant won 6 national titles and 13 conference titles during his 25 year tenure at the University of Alabama. Impressive, I know. But here's something a lot of Tiders cannot get through their skulls: that. will. never. happen. again. anywhere. EVER.

Nobody will ever be as successful as Bear Bryant. I don't mean "ever at Alabama;" I mean "ever ANYWHERE." College football has more parity than ever and, thanks to the BCS, we're not crowning a half dozen national champions every season. Alabama fans think it's totally awesome that they put together a $4 million annual contract for Ol' Saint Nick. But what are they paying for? A 6-win regular season? An Independence Bowl birth? Another loss to Auburn? Oh yeah, recruits, of course. Silly me. Julio Jones is totally worth it. Honestly, the constant comparisons to Bryant and an absolute lack of job security demand an incredibly high salary. If coaching at Alabama is the highly sought after job that Crimson Tide fans want to beleive it is, they wouldn't have to make whatever coach they hire the highest paid coach in football just to get him to sign the dotted line.

Poor* Saban. Even if he were to coach in Tuscaloosa for 24 years, winning 5 national championships and 12 SEC titles, he'd still be in The Bear's shadow. 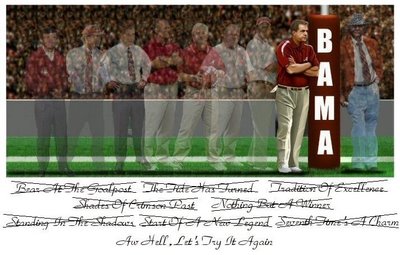 * Perhaps "poor" isn't the best way to describe a man making 4 million dollars a year to tell 20-something year olds to run around and throw things. Even if it is in Tuscaloosa.