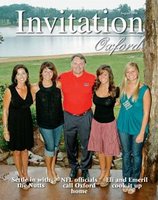 Invitation Oxford, the local "making upper-middle class white people feel more significant than they really are" magazine recently released their August issue which featured none other than Houston Dale Nutt and family as the cover story. Aside from the obvious information which one can simply glean from the cover photograph (his daughters are hot and he has a nice pond, for example), the piece explains that, in the Nutt household, "it's all about family, football, and the farm."

What I found to be a particularly interesting feature of the article was a list of "Nuttables" (this is getting out of hand) which is apparently a list of tenets which are followed closely in the Nutt household. Here is that list as pulled directly from Invitation Oxford: 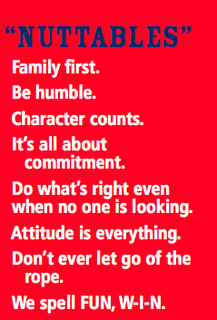 Why share this? Honestly, it's an early Sunday afternoon with football being an excruciating 4 weeks away and nothing passes the time like baiting Arkansas fans. I can see it now: they'll attack his claims of humility, character, and commitment while completely ignoring the glass houses in which they live. Yes, I'm being petty but c'mon, give me a damn break. What else is a rogue blogger to do?