Jevan, if by some bizarre off chance you're reading this, take note. According to your current head coach, Lou Holtz and Mark May weren't keen on giving Darren McFadden his just desserts. You remember Darren McFadden, don't you? If you don't recall, he's the one who "got dat wood right hurr?"

Senility be damned, Lou Holtz has seen a lot of college football (you should hear him and Paterno get into it at the VFW home) and he knows a thing or two. Furthermore, he's given us a pretty fair amount of shit for firing David Cutfliffe and, for the last few seasons, has taken a tone with our program that could hardly be described as amiable. To see him all wide-eyed and giddy-like over anything Ole Miss related is incredibly befuddling.

Woohoo, yahaa! Lou Holtz! Mark May! You better take a close look at him! You better put him up in there for the Heisman! 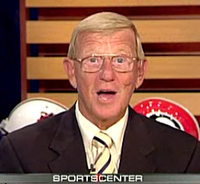