The Local Voice Just Got Cooler

Share All sharing options for: The Local Voice Just Got Cooler

It was cool before. That's why we were pretty damned excited when they contacted us to write a column for them. Yep, it's true. Every other week you will be able to actually tangibly read whatever drivel we've deemed worthy of print. 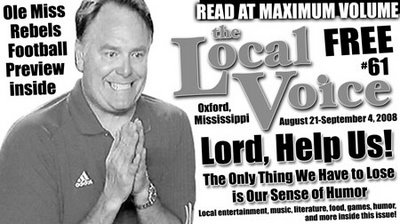 Click on HDN's mug to download a PDF of the entire TLV. Our introductory column is as follows.

Undeniably, July and August are the best times to be an Ole Miss fan. The sting of missed trips to Omaha having finally subsided, renewed optimism abounds among the Rebel faithful in anticipation of football season. Visions of wonderfully humid days in the Grove sipping bourbon and mimosas leave thousands of good ol’ boys dreaming of glory days past, all the while forgetting why we collectively drink so damn much. After all, however thickly we sugarcoat it, Ole Miss football is the tragicomedy of college sports. Rarely can we win or lose in anything other than agonizingly dramatic fashion. Rarely (recently) have we lived up to even the most modestly optimistic preseason predictions. Thus, The Red Solo Cup Blog was born to laugh in the face of such reckless optimism. We’d like to think that for every crusty old bastard pining for heydays past (or non-existent), and for every fat, ponytailed, jorts-wearing internet sportswriter, there is a younger, more disaffected bastard behind them. Snickering.

We are those younger, disaffected fans. Archie Manning’s pro career was over before a few of us were even born. A majority of our undergraduate years included chopper motorcycles, a grizzled shrimpboat captain masquerading as an SEC head coach, and losses to Vanderbilt. Some people call us pessimists, but most would call us realists.

However, even through realistic eyes, there is reason for optimism. With a solid, while untested, quarterback under center, you’ve always got a chance. Coupled with a hyped running game, the offense could be dynamic. The defense, while riddled with injuries, should be better than last year at the very least by the Vanderbilt game, when Greg Hardy and Peria Jerry are projected to return to the line-up. That pass rush, with two projected first round draft picks, should be enough to get pressure on any SEC team.

All of these factors should be bolstered heavily by the most important development of the offseason: a brand new jumbotron. Oh, and there’s something about a new coach? A guy who apparently had 8 bowl appearances in 10 years? Eh, whatever. New jumbotron, y’all. It’s huge.

Truly, with regards to this upcoming season, the possibilities are seemingly boundless. If Snead, Enrique Davis, and the small platoon of newcomers who are expected to contribute early and often live up to their hype; if the injury woes are endured or even overcome; and if the Rebels pull off an upset or two, a bowl game and a respectable amount of national exposure should certainly be expected. If all of the above turn out not to be the case, Oxford’s real estate market will continue to slip into an empty-condo-riddled oblivion and Star Package will record another fiscal year of sky-high profit margins. All things considered, these next few seasons should unquestionably be very, very interesting. We at the Red Solo Cup are excited, and we hope you are too.

Hopefully, if we have not yet angered the editors and readers of The Local Voice, we’ll be here for a while, bringing you whatever our offensive and likely off-base Ole Miss sports opinions may be. We will also be available to you 24 hours a day thanks to Al Gore and his mystical creation of interconnected wires and tubes (we believe he refers to it as "The ARPAnets"). Visit us at www.RedSoloCup.com and please do not hesitate to comment, criticize, insult, or politicize. Our content is regularly updated and as in-depth as a platoon of rogue bloggers can make it.