All sorts of fun things are out there on the Intrawebs

Share All sharing options for: All sorts of fun things are out there on the Intrawebs

I'm not at work today (huzzah!) which means that I've got plenty of time to sleep in, play NCAA, and surf the worlds largest distraction machine, the internet. Over the last few hours, I've found these college football related gems:

-First, from EDSBS comes what may be the funniest Ohio State related image I have honestly ever seen: 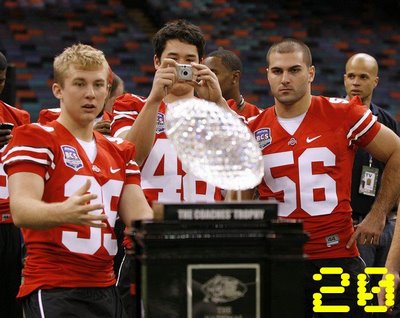 Ok, I know, it's a few days old (had to get that out there before any EDSBS addicts jumped my case) but, damn, this may always be funny. Skinny white Ohioans have dreams and aspirations; it's just too bad scary-ass black dudes with Cajun last names have similar dreams.

-Next comes an ESPN Sports Nation poll result. This poll, on the main page of the website's college football section, asks readers to vote on which unproven SEC quarterback will have the best season. Go now, and vote for Jevan... It's ok, we're waiting right here... You done? Ok, good. Anyway, look at these results: 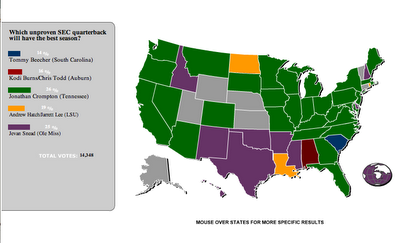 So, Tennessee's Crompton may be leading the overall poll and, if this were an electoral college system, you'd be hearing the pundits calling the race but look at who Jevan has on his side. Obviously, Mississippi and Texas are behind the kid and Texas' immediate neighbors (sans Louisiana, naturally) are unsurprisingly on his side. But what's the deal with Idaho and New Hampshire? Don't get me wrong, I've been both places and thoroughly enjoyed both, it's just a bit unpredictable is all. Hell, I'm glad we've got potatoes and "Live Free or Die" on our side as opposed to lame-ass North Dakota (good work, LSU). Not only that, but if you look at the little globe off of Florida's Atlantic coast you'll see we've got the rest of the damn world backing up our Rebels. Take that, lame-asses. Especially you, Alabama and South Carolina. You don't have any friends. How does that make you feel, huh?

Finally, I found this while stalking my boy Dexter "da lil bastid" McCluster on Facebook:

For those of you who aren't in the know (over 30), this means that Dexter recently RSVP'ed to the Ole Miss vs. Memphis game. Thankfully, he responded that the "plans" on attending. Whew! If this game is going to be anything similar to the last home game against Memphis, I'd expect Dexter to show up and make a play or two.