Let's pull back the reins just a bit. I'm excited about kick-off just as much as any other college football fan. In fact, I haven't been this excited since I went to the Dancing Preachers Conference in Atlanta.
I feel like I have to temper my optimism with some reality from the last four seasons. The players involved with these games are still on the team for the most part, except for those who were a part of "The Great Smoke-out." I feel like it's good to take time to look back from that whence we came, so here's the 17th worst moment from the last four years.
17th Worst Moment: 2004 Loss to Wyoming in Laramie, Wyoming 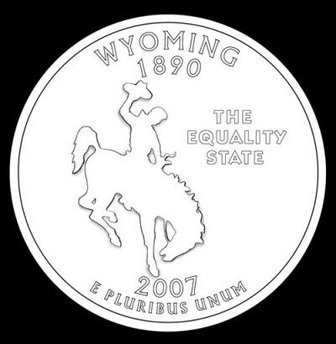 The state struck coins to commemorate the event. Ole Miss beaten by The Equality State.
The season was still somewhat young for David Cutcliffe in the first year after Eli left to go to The League, and the Rebels had mustered a 1-2 start with losses at Alabama(not a surprise) and in Oxford against Memphis(20-13). An overtime win over Vandy left Ole Miss fans with a little hope as the Rebels were slated to play Wyoming and Arky State next, which both seemed like winnable games.
Things went horribly wrong with Ethan Flatt at the helm, however. Flatt, who fumbled once, completed 19 out of 44 passes, well, 23 out of 44 with four completions going to the Cowboys, and the Rebel defense allowed 37 points. This wasn't a recipe for success, but the Rebels fought back late in the game getting an onside kick down by five. Michael Spurlock had engineered a successful drive during the comeback but threw three incomplete passes in a row to end the game and the comeback.
It was Wyoming's first win over an SEC opponent, and the number 17 worst moment of the last four years.