The countdown of horrible Ole Miss moments from the last four years continues as kick-off comes ever nearer.


While this countdown may seem depressing, it is simply a reminder of what we accomplished the last four years: nothing. If you find yourself down over it, congratulations, you've reached a reality check.
I'm glad we've got a new coach and that Michael Oher came back. These are positives, but just take time to remember and laugh about the bad old days.
16th Worst Moment of the Last Four Years: 2006 Loss to Mizzou
I made the drive up to Columbia, so this long sticks in my memory probably more than some others. Let's take a quick look at the numbers, or lack thereof, 162 total yards of offense...for the entire game...against a Big 12 defense: WOW. Ben Jarvus Green-Ellis had 52 yards on 15 carries. Brent Schaeffer threw three interceptions. It was a dismal day for the Ole Miss offense, and the defense let up nearly 500 yards of offense for the Tigers. A 34-7 loss was actually somewhat kind considering the ineptitude and inability to move the ball. 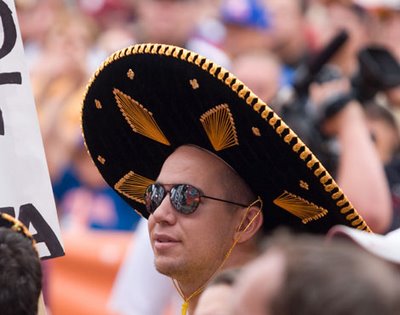 This clever asshat was dancing in the streets after a thrashing of our Rebels. Go ahead and let your blood boil.

15th Worst Moment of the Last Four Years: These players who left, were kicked off or didn't academically qualify for future years of ballin' outrageous in Oxford.
Chris Strong, Mico McSwain, Garry Pack, Jamariey Atterberry, Jerrell Powe(pick a year), Leroy Diggs, Leron King, Rogers Loche, Robert Russell, Quentin Taylor, Hayward Howard(parking ticket extraordinaire), Terry Levy, Roderick Davis, Colby Arceneaux, Isaiah Smith, A.J. Jackson and Jamison Hughes(even though he was just following his dad).
17 players that we had planned to give scholarships to be future players.
I wonder why we were always so thin at LB and D-Line. Hmm. What substance could we possibly assume affected the lives of these gentlemen?
THIS, THIS, AND THIS.
Okay, maybe not the first one, but definitely the last two.
There's still so much more ahead, stay tuned and stay proud.