Let's keep the ride of realistic Rebel-dom rolling to the number 14 worst moment of the last four years. We've seen out of conference losses to Mizzou and Wyoming along with the loss of a few handfuls of Rebel players.

Now we face a harrowing loss to a team that is hated because of their scrappiness and inability to know their place in the SEC hierarchy. Most die hard fans probably have more than one team in their mind, but only one comes to my narrowly thinking mind: Vanderbilt.
14th Worst Moment of the Last Four Years: 2007 loss to Vanderbilt in Nashville, 31-17.
Mike Wallace had one of his best games ever, so no shame to you, Burnell...Mike...whatever. However, Cassen Jackson-Garrison, who gets my award for frattiest name for a running back in the SEC, scored three touchdowns and rushed for 127 yards to lead the Commodores AND THAT DAMNED FOGHORN to victory. 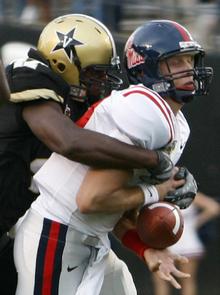 I've been hit like this before. I was doing time in Parchman.
Coach Orgeron continued his stretch of losses to start SEC campaigns extending the streak to three, well, four if you count Cutcliffe's last year. Seth Adams was replaced by Brent Schaeffer late in the game and nearly led the Rebels to a come back cutting their lead to seven points in the fourth quarter, but Chris Nickson, ON A SORE HAMSTRING, passed his way to 200 yards while rushing for 78 yards to keep the Commodore lead safe.
Now I know what you're thinking, how in the hell are there 13 worse moments than what I remember that fateful September day? It's all perspective I suppose. The worst kind of loss in my opinion is a close loss, because it means that you had a chance to win. A chance to win that you squandered by some fateful decision. Getting blown out of the water hurts, but a last second loss hangs with you for decades.