Share All sharing options for: RSC Visits the Volunteer State

EDITOR'S NOTE: We know a lot of you don't give a shit as to what exactly we're doing with our summers. We don't care. We need to pass the time somehow.

After leaving Asheville, Whiskey Wednesday and I drove through the Great Smokies to reach our ultimate destination: Gatlinburg, Tennessee's Pancake Pantry. I know it may sound stupid to, well, everyone that isn't us, but this place is seriously one of the greatest Southern eateries. With a huge breakfast menu that features 20+ different varieties of pancakes mixed and cooked to near perfection, you cannot go wrong with this place (there's also one in Nashville if you're not into kitchy crafts and bizarre mountain folk).

A couple hearty stacks of flapjacks and a pot of coffee later, we hit I-40 to visit Knoxville and, more specificially, take a look at Neyland Stadium. After getting lost on Tennessee's campus, we pulled our car onto Pillip Fulmer Way (yep) and parked beside the stadium. Despite the ongoing construction, we easily sneaked onto the upper deck and were treated to a pretty impressive view. I only had a camera phone with me, so you'll just have to get over the grainy, off-color shot. 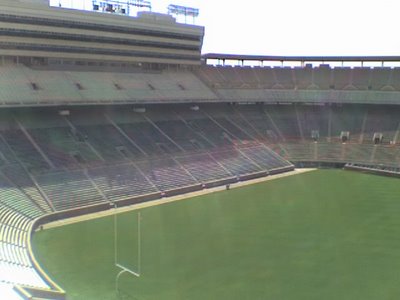 Neither one of us had ever been to a game in Neyland, so we were both sufficiently impressed. Another great quality about the stadium is it's proximity to the Tennessee river which lends to the SEC's 2nd best tailgating tradition: the Vol Navy. As far as college campuses are concerned, Tennessee's is nothing special. It's not too far from downtown Knoxville or the Smokies, though.

After our stopover in Knoxville we headed on into Nashville. Nashville has always been one of my favorite cities in the South. Great music, great bars, good people and a clean(er) downtown area lend to Nashville's reputation. We visited Vanderbilt's campus and made a point (as we have everywehre we've been so far) to visit the football stadium. After having seen Neyland, it was easy to be unimpressed with Vanderbilt Stadium but, let it be known, it is still impressive that a conference's "token academic school" can consistently fill a 40,000 seat venue. I'd like to see if Duke, Wake Forest, or Stanford could say such a thing.

That night, we saw a show (on a Wednesday, mind you) that would have easily headlined Proud Larry's on a Saturday which was only attended by a few dozen people. Our hosts, Scott and Lisa, explained to us that people from Nashville are more-or-less "burnt out" by all of the shows and rarely, if ever, attend them. Another thing I noticed about the audience aside from it's unexpectedly small size is that they actually listened to the music as opposed to drunkenly chatting over it.

The next morning we visited Gruhn's Guitars, Hatch Print Shop, and Grimey's Music; all local establishments which are iconic of Nashville's music heritage.

That's it. It was a short a trip but it was incredibly fun to see things which I knowingly should have seen a long time ago (espcially Athens and Neyland). Hopefully I'll actually get to visit Georgia and Tennessee during game weekends sometime in the near future. If any Bulldogs or Volunteers have a few couches for a few of us Red Solo Cuppers to crash/maybe vomit on, we'd gladly invite ourselves.