Now, in order to be good, Chris Warren is going to have to do several behind-the-back assists per game. Everyone, please temper your excitement. Warren will only be working with Nash for three days. It's not like he's spending the whole summer training with the guy.

Yes. He was invited by Nash. Warren is a beast. That doesn't mean he's as good as Steve Nash fellas. Don't get me wrong. I hope he's better than Steve Nash, but that's unlikely.


Next thing you know, the message boards will "leak" a story about how Will Bogan actually turned down the Skills Academy, so Nash "settled" fro Warren. Honestly, could we stop pumpin up our inbound players to heights they cannot reach? 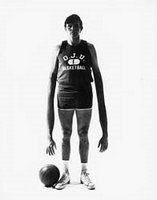 I saw a post that compared Terrence Henry to Jarvis Varnado "with offensive ability". He has never played a minute in college. Varnado led the NCAA in blocked shots last year. Do you see how long his arms are? They almost drag on the ground! Can we set our expectations just a little lower? If we set our expectations low, we don't have do deal with too many of these or these next year.