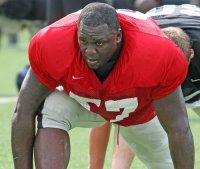 Okay... where's the hidden camera? When is my alarm clock going to rip me from this sublime dream?

Wait, this is really happening?

Yep, after submitting his papers for the first second third fourth time, Jerrell Powe has been declared academically eligible to play football at Ole Miss in the fall.

For any of you non-Ole Miss fans, I don't think you can fathom what this has done to the Ole Miss faithful. Jerrell Powe has been a myth in Rebel circles for three years. His legend has taken on fantastically large, Paul Bunyan-esque proportions. If the legends be indeed true, he once ate a live bear because he thought it was Casey Dick and even scared Kobayashi away from a hushpuppies eating contest. I've also heard that his stat line against Memphis will be 16 tackles, 13 sacks, 4 interceptions, 3 forced fumbles, 124 rushing yards, 6/6 for 300 yards passing, 8 touchdowns, and three injury causing tackles. To many of us, all of our wildest hopes and aspirations for this young man are finally beginning to take form.

But seriously, Jerrell Powe will make a defensive line that was already set up to be one of the conference's best (see: two players projected to go in the first round this April) into a line that rivals any in the nation. While I don't have incredibly high expectations for Powe's actual output, he can provide 10-15 solid plays a game as a high intensity, 325-pound man who, for his size, can fly to the ball-carrier (he has a reported 4.9 forty).

Thank goodness he didn't go to junior college. Had he gone, he would have definitely been a junior college all-American. We all know our track record with those.

So here's to Jerrell Powe. We're proud of you big fella. Now go work out.