Wait a minute, you mean our new coach's name can be used in a lot of puns?!?! Well God damn, call the Inkspot this second!

Share All sharing options for: Wait a minute, you mean our new coach's name can be used in a lot of puns?!?! Well God damn, call the Inkspot this second!

I rarely slip into sudden fits of violent vomiting, but these new, incredibly embarrassing Houston Nutt related tees are just about to get me there. You've seen these things on the backs of third-year-sophomore criminal justice majors and other generally foolish stewards of money a few times before. They're sold at places like University Sporting Goods and Cat Daddy's and are sadly being gobbled up seemingly as fast as they can be printed.

Of course, we're all excited about the arrival of coach Houston Nutt and we want (and expect) him to do great things for us during his coaching tenure. Yet, we don't need to show this excitement by dropping $25 on a shirt with a bunch of shit that really isn't that clever printed all over it. I can just picture the designer of this atrocity to the right:
"Ok, let's see. His last name is Nutt. Hmmm... I got it! Let's do something clever about the excitement of the Rebel fanbase and say that they've all gone 'NUTTS!' Christ, I'm clever. Mark it down, motherfuckers."
What an asshole. Whoever did this even put that stupid 1950's "Americana" looking guy on there, as if that's never been done before. I'm never going to buy a shirt with that Shepard Smith looking son-of-a-bitch on it, ever.
But wait, there's more. When I was Googlin' around looking for this design I found a few other gems. Take for example this shirt. How much more of this can we take? "O: The Coach" was terrible. Not only was "O" not much of a coach to begin with, but the whole concept was a ripoff of campaign stickers for our controversial asshole of a president. Let's nip any sort of "Nutt: The Coach" talk in the bud before deals with Planters and Orange County Choppers (VROOM VROOM MOTHERFUCKERS) get drummed up.

Speaking of planters, the designers of this abomination should likely expect a lawsuit. As always, you can click the image for biggification if need be but in this case I wouldn't so much recommend it. While not nearly as racially offensive, this new "Colonel Nutt" is pretty damned disgusting. It's an obvious ripoff of the Planters icon with a few Colonel Reb like features. Not only is it a cheap knockoff but there are some elements of this design which are just, well, wierd. Like his right hand. What the fuck is he pinching at? He's missed the brim of his hat and his monocle by a good inch-and-a-half each. And why are his elbows making perfect right angles? In addition, the makers of this shirt is peddling their wares through this website which is almost as poorly designed as Colonel Nutt himself.
All of this is really very simple. Essentially, all you've got to do is think up some puns or invoke a double entendre and plaster it on some cloth with an accompaniment of poorly designed graphics. Here, I've made a new shirt just now: 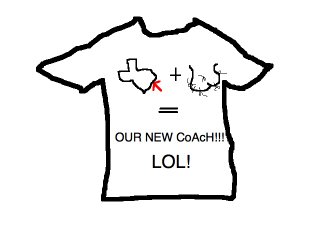 No joke, send me $25 and I'll print you one of the exclusive "Nutty Math" shirts and have it delivered to your domicile in no time. Just be sure to give me your name and a general description of your person so I can know to avoid you like the plague.