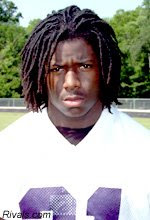 He may not be as entertaining as Rod "GPA don't matter to me" Woodson, but Eddie Lacy is another Ed Orgeron dream recruit being a four-star RB from LA, offers from plenty of big time schools, interested in Ole Miss, and having little to no chance of ever qualifying.
Lacy claims to be a little short of the NCAA minimum 2.5 GPA with a reported 2.0, which means you can take it to the bank he has at least a 1.8. To Lacy's credit he did score a 17 on the ACT.
While I do wish him the best in regards to qualifying, I really do, the quote that really got me was this one. "I don't watch college football. I guess I need to start watching this year. I'd rather be playing basketball." (Where he averages a less than impressive 8 points a game) How can you be rated one of the best backs in the nation and never watch college football? Anyways, that's our recruiting spotlight on a high rated player who we won't get excited over because we do not have a shot at him.