The long wait is over. THE POWE-TRON IS HERE! Well, sort of... computer renderings have been released. That's better than nothing though, right... actually, I think that's the same as nothing. 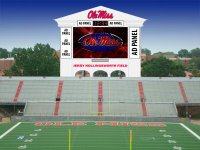 I love it how people go ga-ga over renderings of construction. Generally, the renderings aren't too accurate. While, unlike most renderings, there isn't a smiling, happy conglomerate of racially unintelligible people walking around in the stadium ("Is that guy orange?"), I have to say that I'm still impressed with this image. If this thing looks like the image they released, it's going to be great. The screen itself is larger than the entire "jumbo"tron. Sure, it's not as good as our suggestion, but it'll do.

Kudos to you Ole Miss administration. Even though you didn't get us SOME DAMNED PERSONALIZED SPRING GAME CUPS, you did get us a state of the art video board. I guess that makes up for it, but next year... I want to see a spring game cup with some third-grade reading level innovative phrase like, "Getcha some!" or "COLOSSAL!" or or "GOIN' NUTTS!" or "Blood... everywhere, I don't... I don't know what happe- OH NO! I FEEL THE RAGE COMING AGAIN!!1!eleven"