As 150+ of you have demonstrated, there is a poll on our right hand menu which allows you, the reader, to predict our win/loss record for next season. The poll is powered through Vizu, which easily allows us to use all kinds of nifty tools to analyze the results. The dandiest of these tools, by far, would be the vote map which looks a little something like this: 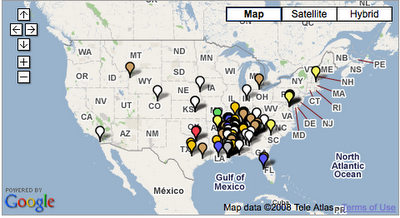 Neat stuff, huh? Anyway, I noticed that 7.9% of our poll's votes were predicting a 3-9 record for the Rebels, the lowest value on the poll. Upon closer inspection, I saw this: 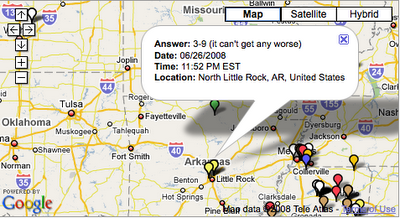 Every marker that is a light yellow color represents a 3-9 vote. It looks like Arkansas fans have resorted to (sorta) skewing bullshit blog poll results just to show us how much of a shitbag Houston Dale Nutt really is. I would like to point out however, that one lone Arkansan from Calico Rock voted for an 11-1 record. He's the green marker north of Little Rock in the above map. Regardless, these votes continue to demonstrate that the denisens of Arkansas are, in fact, delusional. Hell, even our pals down in Starkville put more faith in us. 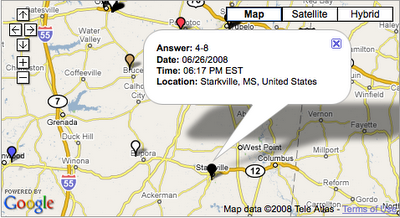 Despite the aforementioned hog slop, the most perplexing vote in my opinion comes from way up yonder in Nashua, New Hampshire. This vexes me because I cannot fathom what we did to anger even the craziest of Nashuans. 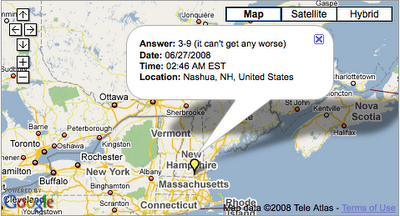 Also, to further demonstrate the affinity our Razorback neighbors have for online polls, I would like to point out this somewhat shocking poll result. Yes, you read correctly. Arkansas fans have placed more importance on our October 25 meeting than they have on their games against former Southwest Conference rival Texas and current Golden Boot rival LSU. When we first hired Houston Nutt, I thought he would make Ole Miss football relevant again. I can already say that this is the case in Fayetteville.