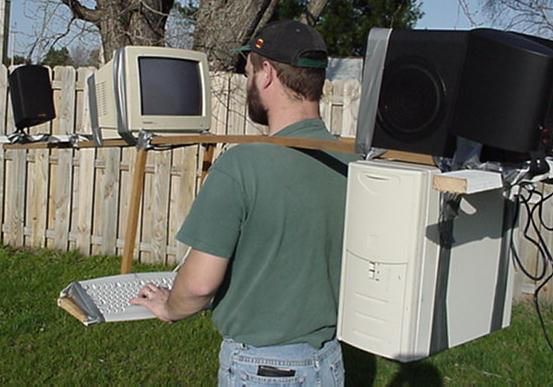 With regards to Houston Nutt, Arkansas fans have the demeanor of a jilted ex-lover. They absolutely despise him and want everyone out there to know it. Yet, despite the animosity, they secretly love and miss him. As I am certain many of you have noticed, Arkansas fans of all shapes and (cerebellum) sizes continuously bash Houston Dale Nutt all over the World Wide Web in an effort to let us Rebels know just how foolish we are for hiring coach Nutt after firing Ed Orgeron. "Nevermind the winning seasons, the defeats of #1 ranked LSU and #2 ranked Auburn, the Heisman-worthy performance of Darren McFadden, and the continuous national TV coverage," they cry. HDN may or may not like weather ladies and has an affinity for scaring off whiny little shitstains primadonnas, making him an abominable bastard of legendary proportions, lest ye forget.

This of course is right in line with our constant bombardment of Tennessee and Duke boards to bash Cutcliffe and our online assault of Saints fans over Coach O...

Oh, wait. I forgot, we've got better things to do.

Frankly, I'm fed up with all of this hog slop. I've seen far too much of it and a great deal of it is poorly written, asinine, and lacking real creativity (much like this blog). Through a very brief period of web perusing, I have come up with prime examples of the kind of garbage that has caused me to lose whatever respect I may have had for Arkansas and its fans. I assure you this isn't the best stuff out there. Finding that would take hours of wading through this muck. Rather, I have just assembled a few snippets of Ozark rambling which typify this nonsense. All spelling, grammar, and punctuation is 100% the result of the original author and has not been edited.

Rivals.com and OMSpirit.com periodically clear their cache so shit talkin' from the period just after Nutt's hiring is not available. However, if you just search for these kinds of posts, you can find them.

Hey tulsa have you moved to Oxford yet to follow your man love yet? People on hogville really miss you. Not!!!!!!!! I have a degree in Physics not in English.

"Tulsa" is another user (TulsaHawg or something along those lines) who previously called out "The Donkey" on his poor spelling and grammar. Tulsa, wishing The Donkey to cease his poor usage of English in order to better the image of his alma mater, did not mention Houston Nutt or Ole Miss. "Nevermind that," McKinneyHog(akathedonkey) said, as he accused his fellow Hog fan of having "man love" for Houston Nutt so strong that he would move to Oxford to express it. The best/worst part about this post is the "Not!!!!!!!" he places after referencing what I am assuming are similar pissing fights on Hogville.

If that's not bad enough, the poor bastard then begins to defend himself against the criticisms of his linguistic "skills" by proclaiming that he was a physics major, as opposed to an English major. I doubt it, McKinney. Y'see, physicists still read and write. Maybe you are a freshman soon-to-be-former physics major, but I doubt you've got a four year degree in anything, let alone physics.


RebelFaithful.com is different in that much of the original HDN bashing is still intact. If you would like to see prime examples of this stuff, you could spend hours reading the threads in their trash talk forum.

Pig slop???? Nothing and I mean NOTHING is any slopier than an 0-8 SEC record....I hear that Nutt has brought in some 1 star recruits...I guess you Reb fans, coaches, and 1 star recruits are just so much smarter than the rest of us.


He objected to the notion that his writing was "pig slop" on the grounds of our Rebels poor season being "slopy." I'm not sure what he means by that. Steep maybe? Anyway, this is a textbook example of a red herring fallacy so not only can this asshole not spell, but he is unable to form a logical argument. Also, he criticizes Coach Nutt's supposed inability to recruit. He'll be unpleasantly surprised to see Coach Nutt's recruits, namely Enrique Davis, dance all over their endzone and fuck their women, come October (maybe not, but seriously that would be fucking great).

I'm just going to leave the poor capitalization and word usage out of this and simply point out the fallacies of his argument. PiggySmalls asserts that Arkansas would have "sucked balls" without the three biggest stars and offensive weapons on the team over the last seven years. While that is a valid assertion, I doubt one could reasonably fault a coach who counts on his players to win games for him because, get this, that's what they all do. This is akin to people that want to discout Cutcliffe as a head coach because of the Mannings. While I'm not a Cutcliffe apologist, I do feel it absurd to say something like "well, without Eli he would have been shit."

Blank should keep his idiot mouth shut after sucking Vick off the way he did and then trading Shauve. WHat a dumba$$! HE needs to just get out of football all together and keep his trat shut. I doubt even Cuttcliff would want to coach the Atlanta thugans


Then, of course, there's YouTube, the globe's largest bastion of idiocy. The comments here are usually quite brief (a phrase or two) yet somehow contain multiple baffling mistakes.

yuipas15975, a commentor on this video, writes:

nutt sucked and he will be worce at ol miss

kyNtiff, a commentor on the same video, writes:

houston you suck you trader
die! kyNtiff is actually not misspelling "traitor." She is, believe it or not, an anti-capitalist and hates monetary systems and the exchange or possession of commodities. She hates Coach Nutt for his trade affinity to the extent that she wants him dead! As you can see, this greatly bewilders Pulitzer Prize winning New York Times columnist, Thomas Friedman. After reviewing her YouTube profile, she has an interesting affinity for Star Wars and MoTown. Rather hypocritical for an anti-capitalist, don't you think? In all seriousness though, where does she get off calling Couch Nutt a "traitor?" He loved Arkansas! They ran him outta town like some kind of heretic despite him bringing the national spotlight on Arkansas to an extent last seen when Arkansas was a part of the now-defunct Southwestern Conference! Yet he's the traitor? It's not as if I had to search for hours or even minutes to find this drivel. Arkansas YouTubers are quite upfront with their feelings and completely unashamed (or perhaps unaware) of their tendency to butcher their native language.


I'm certain you've all seen this a few dozen times over the last couple of months. My advice to you, don't even worry about their "argument" or "points." Just point out their horrible spelling, grammar, and formatting. Really, you can't lose with this approach. Let 'em have it. You're better than they are and you fucking know it.

"Not now, Ma! Some asshole's talkin' shit 'bout Bobby on the intrawebs!"