Rebel of the Week: Omission Edition!

Share All sharing options for: Rebel of the Week: Omission Edition!

I've been wanting and waiting for the past few weeks to give the Rebel of the Week Award to the Ole Miss baseball player who pulls us though a weekend series through his tireless effort, teamwork, and dedication to success.

Well, looks like I'll be looking forward to the Auburn series for that one.

Instead, I'm just going to give it to anybody but this big-mouthed doucheface: 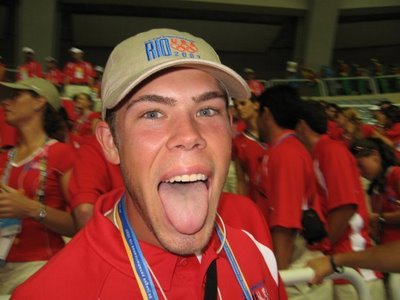 Put your tongue back in you son of a bitch.

Cody, I don't know what the deal is, and neither do any of my cohorts. We're just baffled. You've got what it takes to win so just freakin' get it done! Yeah, neato, you throw a bazillion-mile-a-second fastball, whatever. We're sick of that crap. Throw some off speed stuff, drop a curve or two in there. I've seen that slider of yours, it's nifty, but you've got to get more pitches to work with. This isn't Hillcrest Christian School; you can't razzle dazzle K's into the box score anymore. This is the Maw Fukkin' SEC dawg, pick it up.

Congratulations everyone-that-isn't-Cody-Satterwhite, you're the Rebels of the Week!