Share All sharing options for: Corralling the West: LSU, Arky (fixed), and State

The SEC truly is the conference which writes its own tabloid entries. That's why we're going to occasionally focus on what's going on around the conference to fill you, our faithful readers, in on the SEC scuttlebutt with a bit of boozed-up Ole Miss spin.

LSU: As you've surely heard, Perrilouxzzr is gone. Apparently missing class, skipping team meetings, avoiding coaches, screaming at strip club patrons, defending your pregnant baby momma's honor at a fine nighttime entertainment venue shithole club in Baton Rouge, using fake ID's to get onto casino floors, helping a buddy kick in an apartment door, conducting a lot of glaucoma research, and allegedly being involved in a counterfeiting scheme was the last straw for Les "el Sombrero" Miles. The former 5-star/Orgeronian wet dream will now be looking to utilize his football skills elsewhere and rumor has it that 1-AA Jacksonville St. is interested. I know it may initially seem foolish on the part of the baby-Gamecocks but they could easily clean Perrilouxzzr up if they're willing to do a little preparation ahead of time.
Take, for example, counterfeiting. The way I see it, the process of counterfeiting follows a very simple formula: X + Y = FrEe MoNeY!!!1~
Eliminate X or Y, and there you have it, problem solved (probably not). 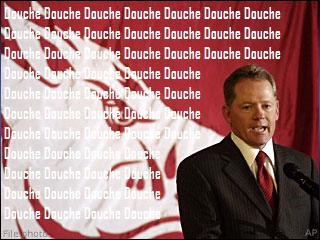 ARKANSAS: Bobby Petrino is a douche. In a complete move of utter douche-dom, Petrino and ultra-douche QB Ryan Mallet (brush your God damned teeth) petitioned the NCAA to waive the 1 year of inactivity Mallet would have to endure as a transfer from another division 1-A school. The NCAA said no. What the fuck Petrino? Did you think you could just woo your way out of this one? While you're not too keen on sticking to your guns/word/blood-oaths, the NCAA is. Mallet, despite having a neato ultra-douchey website, will have to sit out like everybody else. Deal with it.
MSU: The saga of the Starkville-shootout ended yesterday with the sentencing of Michael Brown and Quinton Wesley. They both received suspensions or probations or some kind of slap-on-the-wrist nonsense typical of NCAA athlete trials and will probably end up seeing the field this fall. Oktibbeha County Circuit Court Judge Lee Howard said of his lenient sentencing, "I mean, yeah, they were firing off guns on a college campus, but it's not like they swiped pillows from a Holiday Inn or something." Coach CroomS, when reached for comment, fought through tears to say "They're such.... *sob* great young men.... such *sob* character.... MAROON!" He then grabbed the nearest flag he could find and immediately began to reaffirm everyone that he may be the most bizarre coach in a conference of bizarre coaches.

We lost to that?