Praises be to Jehovah our season is over. Yes, it may sound like I am being a bit of a NAFOOM for saying such a thing, but you've got to be kidding yourself to say that this season was anything other than an embarrassment.

"Yeah, totally! Like, OMFG NIT!?! We could have totally been in the tournament and Dubya-tee-eff is with Georgia in the SEC tourney huh??? LOL!"

Ok, yeah, that in its own right was embarrassing. We had some games in which we played like legit SEC title contenders (Vandy, TN) and some others which were bad enough to completely obliterate our chances at an NCAA berth (SoCar, Auburn^2). However, this is not the embarrassment of which I blog. Nay, I am talking about this embarrassment. 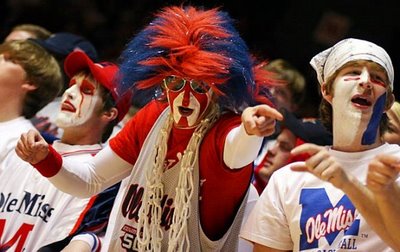 Your Honor, Exhibit A

Although that guy completely exemplifies the source of this rant, he is most certainly the tip of a ginormous, proverbial iceberg. Ever since we fired Rod "Yawn-sketball" Barnes and hired Andy Kennedy there has been a serious influx of douchitude in our Basketball fan base. Now that our team is somewhat successful (a stretch, I know), more exciting, and down with the "hip-hoppers" these asshats come out of the woodwork to support it. You know who they are, they show up über-early so they can get up close and get on CSS for all of their parents and community college alum friends to see and marvel in their extreme fandom. They jump around and rap along to whatever hip noise is causing the Rebelettes to shake their groove thang. And, yes, they will question your legitimacy as a fan if you're not as willing to act as retarded as they are.

NOTE: I bought season tickets and Hotty-ed every Toddy, you assholes. I don't need to prove anything else to you. What's even worse is that you yell at our old, Sunday-school teaching alumni to stand up and scream like crazed banshees even when the white kids are on the court (see: winning handily). Just because we're not all gussied up like the Ultimate Warrior to see an exhibition game against Delta State does not mean we don't care.

What is even worse are the incredibly unoriginal and less-than-inspiring cheers this group has bestowed upon us. Borrowing anything from the New York Jets is pathetic and that nonsense they do when people foul is incredibly embarrassing. 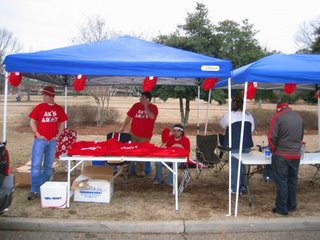 Watching the NIT semifinal game on ESPN and hearing that racket literally made me ashamed to both cheer for the Rebels and to have ever been in the same student section as those clowns. Have you wondered why the only people that participate in these cheers are either a) in the band or b) standing within their immediate vicinity? I'm willing to guess it has to do with the fact that nobody wants anything to do with that shit, yet somehow they persist and persist upon doing it as if it is going to catch on like the HIV of cheers. They think they are great pioneers or trend setters in the unchartered waters of the Ole Miss basketball student section when really they are just pushy and annoying.

And you know what is the worst thing of them all? Many of these kids don't really care about Ole Miss sports or basketball like the lot of us. A great deal of them are just attention whores. Take for example "highlighted-shirt-boy." 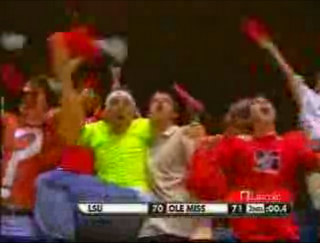 HSB here likes being on TV so much that he decided to show up extra early to get a front row seat right by the cameras. But that is not where his reign of douchedom ends. HSB thought that, instead of wearing a red shirt like EVERYONE ELSE, it would be rad to wear a highlighter yellow shirt so everyone at home on TV could see him. Oh no, dear reader, he hasn't only done this once or even twice; he's done it EVERY TIME WE ARE ON TV! It is this extreme level of pompous, supercilious bullshit which embarrassed me and many others to be associated with Ole Miss basketball these last few seasons. We're not Duke; we don't like basketball. We don't paint our faces or listen to techno or whore ourselves out to the Jefferson Financial cameraman. We drink, curse, and make love to our women and, on occassion, attend a basketball game if it doesn't interfere with our busy schedule of drinking, cursing, and making love to our women.

Yes, jackasses with goofy cheers, we have a fairweather fanbase and yes, nobody in Oxford really gives two shits about basketball. It sucks. But you know what sucks even worse? Having to put up with people who think they can do something about it.