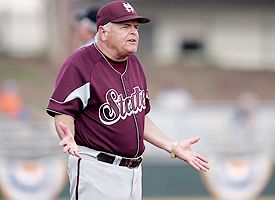 Only a little over a week after kicking himself out of baseball generally, Mississippi State Head Coach Ron Polk was prematurely retired against his will from not one, not two, but three games in the weekend series against Kentucky in Lexington. Polk's ejectment was a fun fact unfortunately omitted from both the official Mississippi State Athletics press release and the article by The Clarion Ledger.

Of course, this comes as no surprise to long-time followers (not to say "fans") of Ron Polk. He comes from rambunctious stock. When asked about Polk's legendary temper RSC Senior SEC Analyst Jackie Sherrill, a former colleague of Polk's at Mississippi State, said, "He's fortunate that he's not as creative as me or there might have been to this day a great number of "fixed" SEC baseball officials.