Share All sharing options for: Terrence Watson: The Man with Violence-inducing Genitals 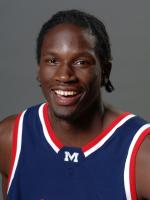 On Wednesday morning at approximately 11:30, several young women harlots got into a fight smack-dab in the center of the Ole Miss campus. The fight, dubbed "The Rumble in the Circle" by the DM, was spurned by a group of women fighting over the right to be the sole claimant as Terrence Watson's woman. Watson, a JUCO-transfer small foward for the Ole Miss Rebel Basketball team and David Kellum's beloved "T-Wat" (which makes you wish we would recruit more basketballers named "Clarence Untson"), is apparently so virile that young women are reduced to violent, Darwinian creatures willing to cut a bitch's face with a boxcutter if it means potential procreation.


I'm not fucking joking. These girls whipped out razor sharp weapons, sending three of the six (yes, six women were involved) to the hospital and injuring one badly enough that she may require plastic surgery. Apparently T-Wat was getting too much, well, "t-wat" and caused many a floozie to become violently angry.

The Slasher, one Marisha Porter, is banned from campus and was released from the Lafayette county detention center on $20,000 bond. She is being charged with aggrivated assault and borrowing tactics from terrorist organizations.

But wait, there's more! Yes, the digital age has made seemingly anything possible and there IS a YouTube video of the fight! The quality is poor and you can't really tell what's going on, but the running commentary by dude #1 (which consists primarily of the phrase "a boxcutter, cuz!") and the arrival of the University Police Department are evidence enough that this was one of the coolest things to happen to Terrence Watson. Ever.


If only my "D" were spectacular enough to cause this...