Rebel of the Week

Share All sharing options for: Rebel of the Week

I apologize. Normally I like to do these things on Friday or Saturday but this weekend was especially busy keeping me virtually void of free time with which to peruse the intrawebs.

As is standard fare with Red/Blue weekend, the Ole Mis Rebels competed (successfully, I may add) in numerous and varied sporting events. The track team had a good showing in the Ole Miss Invitational, The Rebel mens tennis team defeated Mississippi State for the 21st time in a row, the Rebel baseball team took the series from LSU thanks to a dominant performance by Drew Pomeranz, and the Rebels defeated the Rebels in the annual Grove Bowl in front of a record spring game crowd. In addition, if the myriad of sporting events, booze, beautiful weather, beer, frat parties, and crawfish boils weren't enough to get your ass outside for some Rebel festivities, then Manning-Willis Day should have.

Manning-Willis day was more-or-less an opportunity for all of us to say things like:

Manning-Willis day saw a large crowd in the Grove, highlights brought to us by NFL Films, and the ceremonial, collectively-thrown first pitch just before the first inning of our series-winning game. As a celebration of our former Rebel greats, the days events got me thinking about which of these men deserves to be named as our *ahem* pristigious Rebel of the Week. Earlier, we did ask for audience participation in the selection process but the decision obviously seemed too difficult to make.

Yes, the choice between the Superbowl MVP/bringer-downer-of-all-things-BigTeleven and the Defensive Rookie of the Year/human-with-rhinoceros-genetics is a difficult one to make; which is exactly why I won't at all make it. Instead, I am going to pretend that, through the wonders of science some shit which I don't understand at all, we could create a new, ÜberRebel capable of all things football. He would have the physical tools and presence of a Willis while having the intelligence and commercial acting ability of a Manning. He would be.....ELI WILLIS!!!! 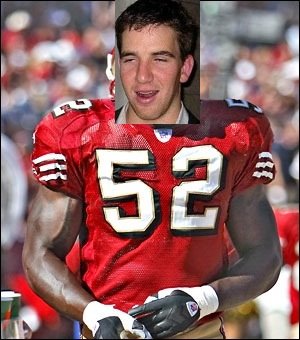 Tremble at my Photoshop skills, mortal!

Congratulations, Imaginary Rebel! You've been named the Rebel of the Week! See you next year at Manning-Willis day!