Rebel of the Week: Ray Poole

Share All sharing options for: Rebel of the Week: Ray Poole 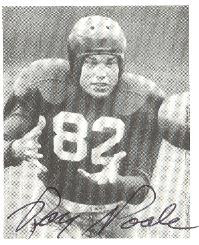 Every Friday here at the Cup we like to recognize a Rebel past or present for his or her contributions to our *ahem* esteemed athletic tradition. This week we are recognizing the late, great Ray Poole. Poole, a letterwinner in baseball, basketball and football, excelled in everything he became involved in.

He was named All-Conference and 3rd team All-American in football, posted a 5-2 record on the mound for the Diamond Rebs, and led the Roundball Rebs in scoring in 1943. He was also an excellent student being a member of the Omicron Delta Kappa honor society and the Ole Miss Hall of Fame. On top of all of this, he was a gentleman and a socialite, exemplified by his being elected Colonel Reb his senior year.

In 1942, Poole's college career was interrupted when he became a US Marine and fought in the Pacific Theater of World War II. Rising to the rank of Lieutenant, Poole was involved in campaigns on Guam, Saipan and Okinawa. While ending his tenure in the armed services, Poole was drafted by the New York Football Giants where he would not only earn All-Pro honors as a defensive end, but also saw action at tight end and kicker amassing a total of 223 points for the Giants.

Poole, along with his brothers Barney and Buster, were the most well known members of the "Pooles of Ole Miss," a family of Ole Miss athletes which garnered nearly 50 varsity letters. Poole Drive on campus is named for the Poole Family. The Cup salutes Ray and the rest of the Poole family for being excellent Rebels on and off the field.