As a part of our media rights contract with TeleSouth we will soon be getting a brand new jumbotron for Vaught Hemingway Stadium. While the prospect of a new, cutting edge screen is thrilling, let us not forget that the man behind all of this is Pete Boone. Yeah, according to the Clarion Ledger, the thing is going to cover about 4000 square feet and cost anywhere from $5 to 7 million but I'm not yet convinced. Remember, we are Ole Miss and we are embarrassingly excellent at cutting corners.

Take this quote for instance: "the actual screen is 84 feet wide by 48 feet tall and it's supposed to be HD quality."

Did anybody else catch that? Supposed to be "HD quality?" So not only is it not HD, and not only does it not necessarily have HD quality, it is simply "supposed" to have HD quality? But wait, there's more! You see, the aforementioned price range of roughly 5-7 million bucks is, of course, determined by the varying bids put forth by big-ass-screen companies and construction companies. Knowing their track record, what makes you think that Pete Boone and the rest of the athletic department will pick the greatest and the grandest screen available? The ever-churning rumor mill even has it that he has, in fact, taken the lowest possible bid.

When many people/Spirit board posters heard about a new jumbotron they had something like this in mind. However, we at the cup know better. We know that whatever grandiose visions we have about this new jumbotron the future in general are false. Therefore we have come up with our own versions of what will actually be built above our north end zone bleachers.

This is the stadium as it looks today. The current screen is on the right hand side juuuuust above the bleachers there... do you see it? No?! Look closer. No this isn't one of those God damned "magic eyes!" Shit, ok, well.... Just bear with me, it's there (click the picture for biggification if need be). 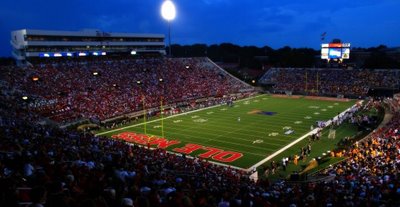 The first potential jumbotron is big as fuck, just as promised, yet is only of "supposed HD quality." 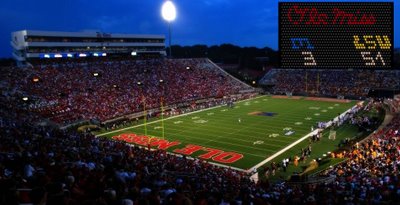 The design of the next screen relies on the assumption that we will dry up a well of expenses with the creation of our new screen. Well, we've gotta get that money back somehow and I submit that there would be no better way than shameless advertising space! 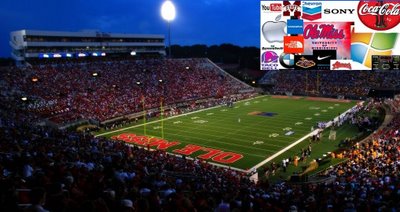 "For some reason, I really want some Taco Bell..."

Of course, we at Ole Miss like to march to the beat of our own drum and could think waaaaay outside of the box with this one. We could move back into our holy-rolling evangelical roots with this one and deliver messages from Reverent Nutt via jumbotron. 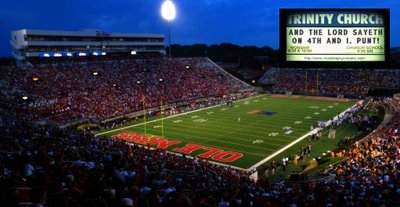 And thou shalt not drink beer in the Grove!

Of course, we've got to name this thing. You can't build such a monumental fuck-up without actually giving it a keen, punchline-worthy name. At Texas they have the "Godzillatron" (not a fuck-up, for the record) so why not name ours the "God-damn-it-tron?" Is there another name that can better demonstrate the frustration of the Ole Miss fan?

No? Yeah, I agree, Mothra was pathetic.

I've got it! Let's give it a name which embodies something which is large, stupid, not really on campus, frustrating, and an unaware butt of countless jokes. The POWE-TRON! Yes, fans, when the inevitably embarrassing monstrosity that is the new jumbotron is completed you'll look up at it and think, "yeah.... Powe-tron."