Rebel fans are getting restless with the baseball team. 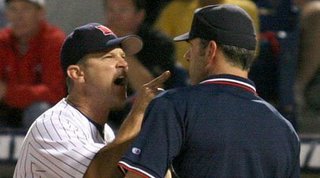 The trip to Alabama was quite disappointing.... The Rebs almost lost the last game of the double header, but a gutsy effort from Cody Satterwhite, Justin Cryer, Fuller Smith, and Logan Power sealed up a 2-1 win. Even after being really bad for about two weeks now, Ole Miss still sits atop the West at 4-5. Alabama and Auburn are tied for the lead in the West as well.

So, what's up with the baseball team? On paper, this is supposed to be the best Rebel team....EVER. I hope either: 1) This is not the best Rebel team because we have nothing to look forward to in the future or 2) They have not played to their potential yet.

Lance Lynn is solid when his breaking balls fall in for strikes, and he has tough innings when the hitters can zero in on his fastball. Pomeranz was great in his first start, but Bianco left him in too long. Satterwhite did a dang good job on Sunday.

No offense, Mike. Seriously, we do not have an offense. Hopefully the ship will get righted tonight against Memphis.

Prediction:
Philip Irwin does a great job for the Rebels, and Ole Miss finds enough offense to survive.
Rebels 4-3