May I have your attention please. Now pitching for the Ole Miss Rebels: Scott Bittle

Share All sharing options for: May I have your attention please. Now pitching for the Ole Miss Rebels: Scott Bittle

Friday night's showdown in Oxford between Ole Miss and LSU was nothing short of epic. Lance Lynn out dueled three other LSU pitchers en route to a 2-1 victory. This was an emotional game for the Rebels as Lance Lynn, Matt smith, Brett Basham, and Scott Bittle all repeatedly showed their emotion throughout the game. Lance Lynn fanned 12 batters, and he absolutely embarrassed the majority of the LSU batting order.

In the top of the third, LSU's Ryan Schimpf hit a two-out solo shot over the right field wall. However, Fuller Smith hit a two out double in the bottom of the third. Then, Logan Power hit a double to tie the game at one. 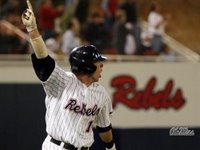 The score would stay the same until the bottom of the eighth when Bradshaw came in to pitch for the Tigers. The first pitch he threw was sent over the wall by Brett Basham, and this would be the difference maker in the game. In typical Rob Reinstetle/Mike Bianco style, Basham swings at the first pitch he sees. Their theory is that the first pitch thrown will be the best one the batter will see. This worked this time, but it Basham's sub .280 average says the system is not full-proof.

The real story of Friday night's game came in the ninth inning. Scott "The Bittler" Bittle

came in to close for the Rebels. After Lance Lynn had worked 8.0 innings and only allowed two hits, why take him out? Why not the complete game?

The answer: REVENGE. Let's flash back to the 2007 series in Baton Rouge against LSU. The game is tied at 3, and Scott is brought in in the ninth to tame the Tigers. Here is what happened: Single. Single. Intentional walk to load the bases. Un-intentional walk. Game Over.

Back to the present. Scott Bittle had waited a year to avenge the corn dogs, and he shined. He allowed one hit and struck out two. In two weeks, Bittle has gotten revenge on Vanderbilt (two blown saves against them last year) and LSU.

Spark notes on Friday night:
Rebels roll to eight in a row.
Lynn is back.
Bittle is amazing.