Share All sharing options for: Jordan...HEEEENNNNRRRYYYY! (Logan Williams too) 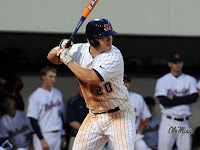 Alrighty boys... The Rebels won their game against Arkansas State last night. Thank goodness. That brings the Rebs to 2-0 on the week and 27-15 overall.

Quick Recap:
It was a back and forth battle for the Rebels, but they pulled out the win when Logan Williams hit a two-run shot in the eighth followed by a bases clearing single (kind of a double) from Jordan Henry. The final score was 9-4.

Brett Bukvich got the start, but it was Rory McKean who got the win after 1.0 inning of work. Scott Bittle finished the game out by pitching 1.1 innings and striking out three while not allowing a hit. "The Bittler" does it again.

I apologize if I spend too little time recapping game action for you. I think it more important to offer you my analysis of where we stand before each series and what our strengths and weaknesses may be.

Looking to the Future:

Many talk about wanting to host a regional, and I just do not see that happening. Our RPI is around 44th right now. We're 27-15 (10-8 SEC). Here is my formula for hosting a regional:
Win two remaining midweek games Memphis (RPI 160) and Jackson State (RPI 206). Then, we would have to sweep Arkansas (RPI 34) and Auburn (RPI 45). I do not know that incredibly much about how RPI works, but we need to sweep those home series to make sure we get our RPI into the low thirties.

Here comes the hard part. We absolutely have to take 4 of 6 on the road against Georgia (RPI 13) and Kentucky (RPI 41). If you have already done the math, you realize that would make us the two seed (barring a Georgia meltdown) in Hoover with a 20-10 SEC record and 39-16 record. I believe this would pull our RPI near about twenty. With a fat check to the NCAA, luck, and other teams having end-of-the-season disasters, we could host. Also, I realize that winning streak would make us the absolutely hottest team in the United States. However, this should also show you how absolutely implausible it is for us to host.

Here is what really happens:
This weekend, we take two of three from Arkansas. Then, we win both midweek games the following week. The following weekend, we win one at Georgia. We come home to sweep Auburn the next weekend. The final weekend of SEC play, we win two at Kentucky. That's 36-20 (18-10 SEC), and I would guess our RPI would finish about 25th. I'm sorry Rebel faithful, that is not enough to host a regional. "Wait a minute," you may say. "What if we have a good showing in Hoover?" Ok, so you want to do well in Hoover. I say that we make it to the championship game of the SEC tourney, we might host (keep in mind that the host sites are announced before the SEC tourney championship is actually played, so winning or losing it does not affect host status).

Ok, so back to reality. Realistically, a 17 or 18 win record in SEC play combined with our horrible RPI puts us as a 2 seed (I can't make myself believe we'd ever be a 3 seed) in some other team's regional. It is very possible to win on the road and get us to Omaha (i.e. Miami 2006).


What I am liking:

Pitching: Lynn is good at home. Pomeranz is ridiculously good. Buk and McKean are my two candidates to fill in the Sunday role. Obviously, Bittle is my boy at closer.

Hitting: If Jordan Henry's and Logan Williams' bats heat up and Guerrero and Overbeck get back from injury, book your hotel rooms in Omaha (also book them at wherever we play our regional and super regional).