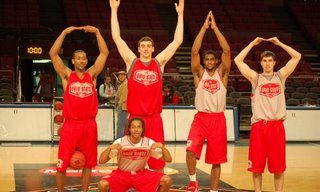 The Ole Miss Rebels managed to be one of the last 18 teams playing in college basketball this season as they advanced to the Final Four in the prestigious National Invitation Tournament. Unfortunately for the Rebs, they ran into some stiff competition in New York, themselves. Themselves disrupted the Rebels offensively which led to their dismal shooting in the first half and gave the Rebels a 27 point deficit. Themselves also forced 20 turnovers and themselves' lack of effort on the defensive side of the ball allowed Ole Miss to be out rebounded by 5.
Still, Ole Miss received solid contribution from DAHVEED Huertas who had a solid night from beyond the three point line and Chris Warren who delivered 19 points.
Rebel senior Dwayne Curtis went out in style with a 5-13 night from the floor with a 2-6 performance from the line, way to lead your team to vic...oops, nevermind DC.
When asked about the performance of the team Andy Kennedy set the record for most consecutive obscenities before concluding that, "It was just a shame Jamont Gordon and Charles Rhodes could not have made an impact for this team."