Share All sharing options for: "Hi, I'm Ron, and I have a problem." 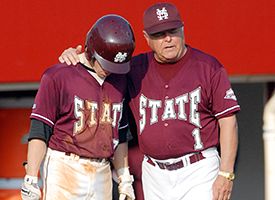 "Sometimes, son, all you can do is cry. But, remember, save some tears for Tuesday - we're gonna need 'em."

This weekend, Vanderbilt, a team that provided the meatiest portion of the Rebels late nine-game win streak, scored not one, not two, but thirty-five runs on a beleaguered Bulldog team that is quickly becoming the Baylor Northwestern New Mexico State Mississippi State of Southeastern Conference Baseball.

Considering the teen pregnancy rate in Mississippi, there are children alive right now (probably reading Red Solo Cup) whose parents weren't alive the last time Vanderbilt swept a road series. And this weekend, they did it by scoring thirty-five runs.

If Vanderbilt's runs this weekend were standard twelve-ounce cans of beer, Nick Nolte would be hammered a little buzzed.

And, to continue the use of metaphors, if Mississippi State's improbable run to the 2007 College World Series was the Blame It on the Rain of Ron Polk's career, the fantastic implosion of 2008 is probably this.

Oh, and by the way, the 14-21 Bulldogs face Ole Miss tomorrow night at Trustmark Park in Jackson Flowood for the Mayor's Governor's Cup. If the 'Dogs win, I'll stop believing in baseball.

Jackie Sherrill, Senior SEC Analyst for RSC, who was the head football coach at Mississippi State the last time Vanderbilt swept an SEC road series, said of Polk's disastrously sweet career-ending decline, "Don't give up, Ron. Driving Mississippi State athletic programs into the ground is a pleasant and rewarding experience - almost therapeutic. I endorse this practice with my highest regards."